Throop is a tall humanoid woman of indeterminate age with bronze skin and a mostly-shaved head, save for a very long topknot that’s dyed a shocking salmon. She wears large spectacles, large hoop earrings, and many bangles.

Throop is the majordomo of Cat Lord Schnookums, and is the manager of Schnookums’ financial affairs. She seems to understand Schnookums’ mews and chirps as a language. Most people who know her assume that she is Schnookums’ cat-pet. She is an extremely savvy negotiator and has an uncanny ability to know exactly what her opponent really wants during contract talks.

When the party met Throop, she was wearing a similar vidcrystal to the one Tarkiov wore. Upon conversation, he learned that she was from the same village as Jaala, and the two knew each other, although it has been many, many years since Throop had been in the Green Lands. Throop was the person who suggested that they seek financing from Schnookums’ organization rather than signing on as a caravan guard. 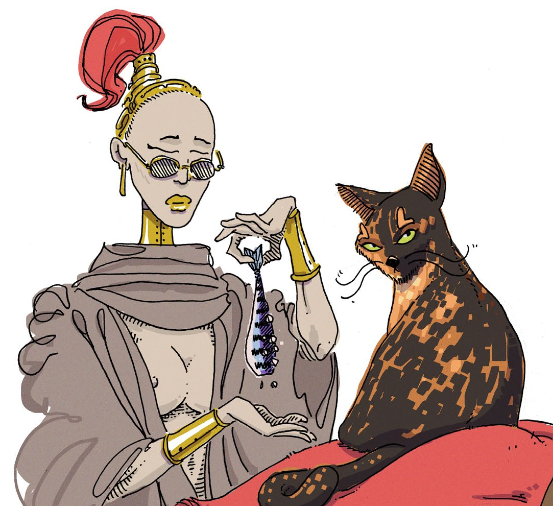